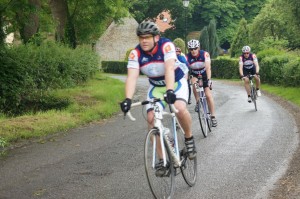 The ride is organised by volunteers from British Gypsum, the UK’s leading manufacturer and distributor of plaster and plasterboard, and supported by its FORS accredited haulage partners, DHL and CEVA Logistics.

The three companies are working closely in partnership to raise the bar on safety for vulnerable road users. This work has already delivered an improved approach to vehicle standards, an innovative load securing system and increased driver capability.

In 2014-2015, CEVA achieved FORS Gold status and the company is using the ride to promote their Vulnerable Road User activity in 2016.

The ride has evolved from the ambition of 16 riders to raise money for a personal charitable cause, to an event that now hosts well over 100 riders and supports local and national charities.

The nominated charity for 2016 is The Guide Dogs for the Blind Association, a long-established supporter of Vulnerable Road Users.

In 2015, the corporate sponsors of the ride were delighted to hear that their contributions of shirt sponsorship, people-time and company resources helped the ride reach the £100,000 milestone for funds raised during the nine year history.

For more information about sponsoring or taking part in the ride event, please contact Jason Parker, Logistics Manager at British Gypsum: jason.parker@saint-gobain.com or +44 (0)7795 027461.